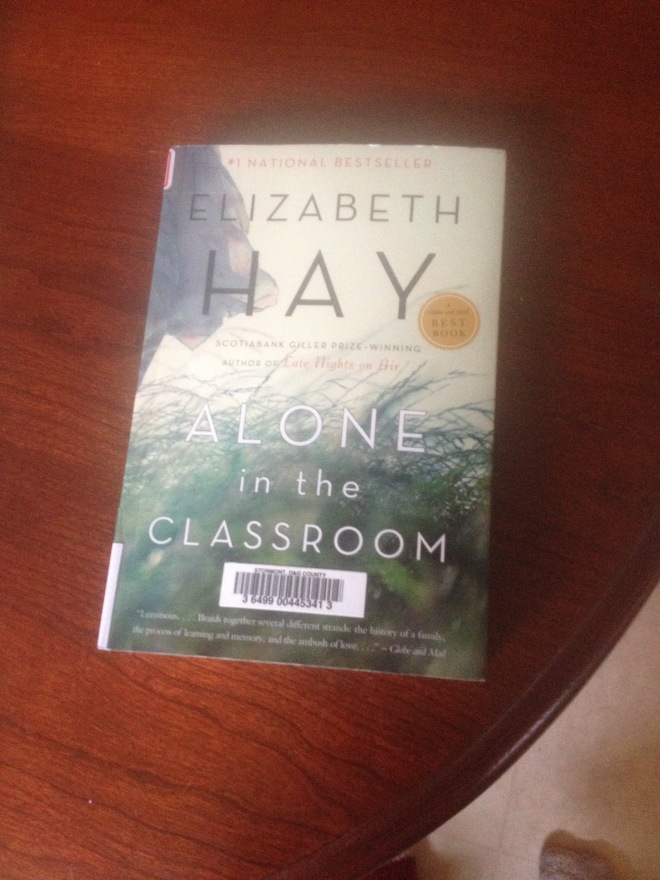 Last night I attended a reading and Q&A session with the moody-toned Elizabeth Hay whose voice ebbed and flowed in warm caresses over her enraptured audience. Before a fortnight ago, I had never heard of this stylistic author. I had gone to my local library when I saw a flyer posting the event to take place in Avonmore, On. Gobbling any webinar, speaking engagement, and article which concerns itself with writing, marketing, or publishing, I decided to pick up the book and read it before attending  the event. What I discovered was unsettling, rich, curdling, and brave.

“A novel has it own needs, the characters have their own stories.” Elizabeth Hay

Throughout the reading of her novel Alone in the Classroom, I kept hanging on to the threads of my own sanity as she so subtly weaved the sanity and insanity of her characters. Like a seesaw, her characters swayed back and forth to likeable then pity-able then back again. And yet her characters never totally acted out in an uncharacteristic fashion. The heavy layers of emotion and social acceptance surrounding plot and characters were thought-provoking to say the least. This kind of book is the first in my repertoire of read pieces. And it opened my eyes to the kind of writing which is completely raw. The boundaries of my comfort zone were pushed to a great degree.

Connie Flood, a young schoolteacher, observes during her younger years the mental atrocities of the principal Parley Burns toward the students. The end result, a young girl dying in a fire. Years later, Connie is a journalist and comes across the murder of another girl seemingly unrelated to the first tragedy. The web made of different threads of lives spans three generations and sheds light on the fragile sanity of the human mind.

One thing which Elizabeth Hay stressed during her Q&A was the ability to give up control of your characters and to not squash them under a judgmental thumb. To let your characters breathe and become alive is to truly engage an eager audience. During the Q&A, I asked her what was the most profound advice she could give to a budding author who is truly intent on touching people’s hearts with the written word. She said: “You have to be willing to do the work.” She confessed that at least once throughout the process of writing each novel she believed that her work was complete garbage. Then she had to get past it. And she did. She would have to get to the point where she did this: “An artist’s job is to turn themselves inside out.” Kenneth Clark. Having already written one novel and planning to write many, many more, I, too, have reached these points. And it’s scary. You put yourself in a vulnerable position to your own self.

Have any of you read Alone in the Classroom? Let me tell you that it’s not for the faint of heart. If you have, what did you think of it? It’s style, it’s layers? If there’s another book (fiction or non-fiction) that’s pushed you of your comfort zone, what is it?

This site uses Akismet to reduce spam. Learn how your comment data is processed.